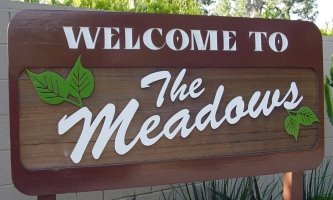 The Cubs are Playing (not the baseball team)

A guest of a Meadows resident recently saw two cougar cubs run across the street in front of his car at the hairpin turn on Canyon Crest. It happened at 10:30 pm.
Posted by Welcome to The Meadows at 3:44 PM 1 comment: Links to this post

A neighbor found a set of keys laying in the street on Canyon Crest near the noisy AT&T box. It is 2 rings. One has what looks like a house key and another smaller key. The other ring has a Chrysler key and car remote control. If you know who these belong to or they are yours, call Patrick Coleman at 626-354-1601.
Posted by Welcome to The Meadows at 10:30 PM No comments: Links to this post

A neighbor in The Meadows reported this weekend that he dismantled, for the second time, a deer blind built in an Oak Tree in El Prieto.

For those unfamiliar, a deer blind is a perch that is built up in the trees so that a hunter with bow and arrow can stalk the deer for an easier kill. The neighbor reported that the deer blind is just above an area where the deer rest.

The deer blind was found in the Oak Tree that is to the south of the trail that leads to El Prieto Canyon. The best way I can describe the location is to say that when you're walking down the path from El Prieto Road, it is not the first big Oak Tree in the clearing. Instead of turning into the narrow path that leads to El Prieto trail on the right, go to the left through the brush to the second large Oak Tree.

Please use caution, but be on the lookout for these blinds and any evidence of hunters.

And thanks to the efforts of our neighbor in protecting the wildlife around us.
Posted by Welcome to The Meadows at 1:20 PM No comments: Links to this post

A note from a neighbor at the corner of Canyon Crest, near the "Welcome to The Meadows" sign.

"As you have probably noticed there were 2 AT&T boxes installed in the Meadows garden near the sign. While I think they are ugly, they appeared harmless. About 2 weeks ago, one of those boxes was activated and our property and home is now plagued by an incessant fan and noise. (The other neighbors around us have expressed concern as well.)

We have contacted the Altadena Towncouncilman, Sarge Gibbs, but the resolution is not very quick. We would appreciate any suggestions on how to battle a corporate giant from others in the neighborhood.

I also want you to know that we are placing our trash cans (just leaves / grass) in front of the box to calm the noise. I don't want the neighborhood to think these were left by accident - it is intentional to help us get some peace at night. I am also hoping that by informing the neighborhood that these are our trash cans we can avoid them being stolen as well."
Posted by Welcome to The Meadows at 1:17 PM 1 comment: Links to this post

This was posted as a comment to one of the blog articles. Not sure who sent it, but if you see this dog, please contact me and I'll post to the blog.

"Has anyone seen a Tennessee Walker Hound named Ziggy wandering around? He is 12 years old and has gray fur on his muzzle an looks like a large Beagle. He has a chip, so the owner is looking for him at the local shelters, but I thought that someone might have seen him wandering around Loma Alta park in the last couple of days. "
Posted by Welcome to The Meadows at 3:01 PM No comments: Links to this post

From a neighbor driving out of The Meadows:

"I saw the mountain lion this morning on the way to work. As I came out of the hairpin turn by the creek, he ran across the road, right in front of me. By the time I grabbed the camera, he was up the side of the hill out of sight. I'll catch a picture of him sooner or later."
Posted by Welcome to The Meadows at 6:32 PM No comments: Links to this post

Activity in The Canyon

I heard from a neighbor a few months ago that they were concerned about Santaria activity in Millard Canyon below the hairpin turn on Canyon Crest. They had found evidence of candles being lit in a canyon very vulnerable for fire. Here is an email I received from a neighbor on lower Canyon Crest:

"I'm writing to let you know of some disturbing activities in Millard Canyon just below the hairpin turn. Someone has apparently been conducting Santaria rituals in the woods and along the stream in this area. This has involved slaughtering chickens, smoking cigars and burning candles in dry brushy areas (apparently at night).

Some of the other materials used are coconuts, rum, piles of cinnamon bark and many spent matchbooks and other ritual debris. Over the past two years my friends and I have noted the carcasses of several chickens, ritual sites, and recently, a large joint of rotting meat and bone hanging from a tree in a plastic bag. The frequency of the activities seems to have increased lately.

My neighbor ran an online search regarding Santaria, and it seems all the materials I've mentioned are used in rituals. A person with the San Gabriel Mountains Regional Conservancy said this type of activity goes on in several of the foothill canyons along the San Gabriels.

Now, I consider myself a religiously tolerant person, but I draw the line at people killing chickens and playing with matches in the woods around here. I think this would be a concern for many Meadows residents since a wildfire originating from this area would likely block the only way out of the Meadows and wreak havoc."

One of our Towncouncilpersons has contacted the sheriff. Capt. Blow is sending a deputy to investigate.
Posted by Welcome to The Meadows at 6:23 PM No comments: Links to this post 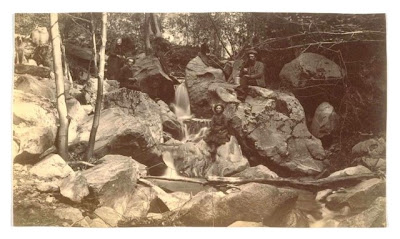 Environmentalist's Rendezvous Picnic
Saturday, September 13th
Join leaders of Pasadena-area environmental groups in an informal setting and learn about their activities and programs. Gather at 4:30 pm, informal presentations at 5:00 pm, potluck picnic at 6 pm, under the oaks at Eaton Canyon Park Outdoor Classroom.

The Classroom is south of the Nature Center located at 1750 North Altadena Drive, Pasadena. From the 210 Freeway in Pasadena, take Altadena Drive north about 1.5 miles; about 500 feet after crossing New York Drive, turn right into the park.

All are welcome. Bring a dish serving 6-8 people. Beverages, plates and utensils will be provided. For information and to RSVP, contact coordinator Ginny Heringer at 626-793-4727 or ginnyh@ix.netcom.com.

Hit and Run on Canyon Crest

From a neighbor in the 4100 block of Canyon Crest: "Last night (Sunday night) we had company over until about midnight. Two of our guests cars and our daughters car, 3 total, were hit by a hit and run driver. Two of the vehicles were on the East side of the street and the 3rd was parked on the West side across from our driveway. It happened sometime between 8:30pm and midnight. There are pieces of brake lights and mirrors we believe to belong to the hit and run driver. We did not hear anything unusual and noticed the damage this morning. When we phoned the guest that left at midnight, he checked his car and noticed damage."

From Greg - I know there were a few parties here in The Meadows last night. Any chance this is a guest of one of our neighbors? Please ask your family and friends if they have any information.

Thanks.
Posted by Welcome to The Meadows at 6:17 PM No comments: Links to this post